Sivagangai Medical College and Government hospital has started and functioning successfully from 2013 to 2016 till date. Many people rapidly looking for the sivagangai medical college phone number and hospital proper contact numbers from various locations but they are strugling to reach the correct person. It was a great milestone for Sivagangai people and nearby villages. After completing the construction Government Hospital was opened and running from 01-03-2013. The total new building includes 200 to 300 beds in patient ward, out-patient ward, college campus building, medical college students' hostel and Doctor's quarters for professors and guests and new auditorium. Medical college was opened and running from 01-08-2012 and the first year was completed with 100 students.

Hospital DEAN Dr. Karthikeyan, M.D., DEAN I/C. GOVT. SIVAGANGAI MEDICAL COLLEGE & HOSPITAL,. SIVAGANGAI and he have been providing full support to improve the complete functional of both college and Hospital.

There is a separate Administrative Block for office administration. Now new staffs are admitted in the office campus and they are started to computerized the every activity in to digital format. During my visit I met few staff and asked the details about the functional activities and admission process. They gave the causality, ward, medical store; and administrative office phone numbers to me additionally gave some inputs for helping me to write this document. Now new compound wall and entrance gate construction is on progress for security purpose

In the hospital now converted in to fully equipped and new instruments has implemented and the services started to the public. Police enquiry office located in front of the Government Hospital and if any accidental cases come for the admission there is no need to go for Sivagangai police station. Just complaint to the in charge police man and simple registration is enough. 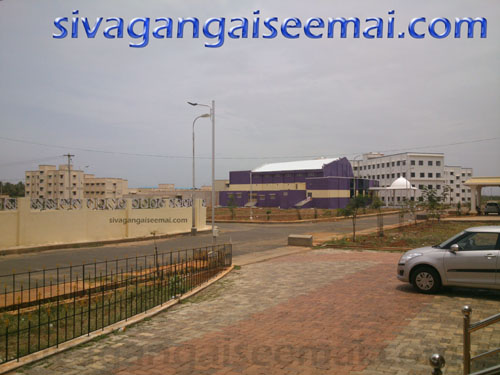 Totally there are 100 seats available at Sivagangai medical college. 2012 first batch now shifted to second year successfully. 2013 academic year 85 students are admitted and the first year classes going on. Remaining 15 seats will fill up through all India Medical Counselling, said JAO on August 14 – 2013. Admission process are clean through the cut off marks and Tamilnadu Government Medical counselling only, so people do not follow any other routes or alternative ways and don’t believe any person’s personally that is impossible. Appointed doctors are living in the quarters and students are mostly stayed in the hostel buildings. I tried to visit the hostel environment, and quality of foods distribution to the students but the permission is not granted to me by the management.

I saw a small canteen in the hospital campus nearby medical store but not yet tasted any items in the canteen. Private tea shops available in the campus but hotels are too far from the hospital campus. Suppose students want to take the variety food they need to go the town and there is no doubt.

Auto stands available 24/7 in front of the hospital but not sure in Mid Night timings. In the day timings mini bus available to Sivagangai bus stand and railway station.

Government Sivagangai Medical College & Hospital ( SMCH ) is an Educational Institution located in outskirts of Sivagangai Municipality, Tamil Nadu.Govt medical college at Sivaganga started and functioning successfully. Tamil Nadu Government Medical College at Sivaganga is all ready to function from the coming academic year 2012. Speaking to newsmen after visiting the recently completed college and hospital building, Tamil Nadu Minister Gokula Indira said the college had all the requisite facilities that was built at a cost of RS 97 Crore would start functioning with 100 students. The building includes 200-bed in patient ward, out-patient ward, students's hostel and quarters for professors. The college dean Mohmmed Ismail and collector Rajaram were also presen. Sivagangai Medical college hospital will increase the beds from 200 to 300 due to facing the more people visiting.This college is affiliated to the Tamil Nadu Dr. M.G.R. Medical University, Guindy, Chennai.It is recognized by the Medical Council Of India.

The cut-off for open category will be 199.75 this year against 197.50 marks in 2010 increase of 2.25 marks. From July 1, the selection committee, in-charge of admissions, will call students as per merit and the rule of reservation. And it’s not just the cut-off marks that will matter during counselling, but the score in other subjects and age may also count. When push comes to shove, even luck may play a part, especially for centum holders. For instance, this year 65 students have secured centums in biology, physics and chemistry against 14 last year. All of them will fall in the open category. First rank will be given to the student who the scores the highest mark in the fourth subject, which could be zoology, mathematics or computer science If there is a tie in this, then the seniority in age will be considered If this also fails, the ranking will be based on the greater of a random number generated for each candidate The Madras Medical College has just 14 seats in the open category list. This year, the number of students who have scored above 195 marks has nearly doubled compared to last year. A total of 3,317 students have scored over 195 marks as against 1,553 students in 2010.

EARLIER; Govt medical college at Sivaganga started and functioning successfully. Sivaganga (TN): Tamil Nadu Government Medical College at Sivaganga is all ready to function from the coming academic year 2012. Speaking to newsmen after visiting the recently completed college and hospital building, Tamil Nadu Minister Gokula Indira said the college had all the requisite facilities that was built at a cost of RS 97 Crore would start functioning with 100 students. The building includes 200-bed in patient ward, out-patient ward, students's hostel and quarters for professors. The college dean Mohmmed Ismail and collector Rajaram were also presen. SIVAGANGA: The State Government has sanctioned Rs.104 crore for the construction of a medical college here for which Chief Minister M. Karunanidhi is scheduled to lay the foundation stone in the second week of this month. Collector Pankaj Kumar Bansal told The Hindu that Rs.97 crore would be spent for the construction of buildings alone. The remaining Rs.7 crore was meant for miscellaneous expenditure.

A 300-bedded hospital with all required infrastructure and equipment would be established. Mr. Bansal said that other facilities for the college, including administrative buildings, classrooms, hostel buildings, staff quarters and parking lots, would be constructed. Around 45 acres of land had been identified for the college, which would be located near the stadium. The land, which was part of the Raja Duraisingam Mannar College, had been transferred from the Education Department to the Health Department. Mr. Bansal said that 100 students would be admitted initially.

The college would become operational in a year. Higher officials from the Department of Health, Public Works Department and other departments had made several visits to Sivaganga to discuss the plan, proposed facilities, steps needed for receiving recognition from the Medical Council of India and speedy implementation of the construction work. Mr. Karunanidhi to lay stone for medical college on February 8 45-acre land has been chosen for it in Sivaganga: Minister Sivaganga: Chief Minister M. Karunanidhi will lay the foundation stone for the Sivaganga medical college on February 8, according to Minister for Health M.R.K. Panneerselvam. Speaking to reporters here on Monday after visiting the proposed site near the stadium, he said 45-acre land had been chosen for the medical college.

A sum of Rs.105 crore was allotted for construction of buildings and creating all necessary infrastructures for class rooms and administrative buildings. The plan was to complete the construction within a year so as to start the college from next year. It had to complete all parameters prescribed by the Medical Council of India to start the college. All-out efforts would be made to get all necessary clearances as soon as possible to admit students. Accompanied by K.R. Periakaruppan, Minister for Hindu Religious and Charitable Endowments, and Collector Pankaj Kumar Bansal, Mr. Panneerselvam, later, made a surprise check at the Government Hospital here. He visited several wards and met some of the patients and heard grievances. He also verified the attendance registers of doctors, nurses, pharmacists and technicians.

There were no attendants when the Health Minister visited the CT scan and physiotherapy centres. However, the attendance registers showed that they were on duty. Following this, he directed the Collector and hospital authorities to take departmental action against them. On noting the unclean environment in a ward, he also directed the authorities to take necessary action against two nurses. SIVAGANGA: Construction of buildings for the Sivaganga Medical College would be completed within 15 months, said the Minister for Hindu Religious and Charitable Endowments, K.R. Periakaruppan. Speaking to reporters here on Monday after presiding over the ‘bhoomi puja’ for the construction, he said that out of the Rs.97 crore allotted for the medical college, tender had been finalised for Rs.75 crore. The construction would be taken up on 30 acres of land identified for the college.300-bed hospital.

A sum of Rs.30 crore would be spent for the construction of the 300-bed hospital. Remaining amount would be spent for the construction of an outpatient ward, a sterilization department, laboratory facilities, blood bank, administrative block and hostel buildings. Officials were asked to speed up the process of finalization of tenders for the remaining work. They were instructed to take necessary steps to complete the project within the stipulated time. Now the building process is completed 75% and will open the classes in next academic year. This is a very big movement for sivagangai city.