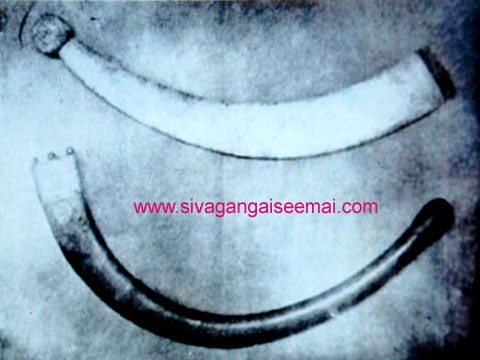 The English Colonel James Welsh said, “ It was he ( Cheena Murdoo) also, who first taught me to throw the spear and hurl the collery stick (valari), a weapon scarcely known elsewhere; but in a skilful hand capable of being thrown to certainty to any distance within one hundred yards.” Periya Marudu was also skilful at the art of hurling Valari (collery stick) to a fixed target. An anecdote is connected with his ability and proficiency in hurling valari stick to a fixed target.

One day Periya Marudhu went to Madurai. He reached Vandiyur Mariamman Teppakulam (tank) to exhibit his feat of ability in hurling valari in the presence of the spectators. He was getting ready for throwing valari from one end of the tank. He had stamped his legs on the ground exerting full force, hurled valari to the opposite side of the tank. The valari thrown by Periya Marudhu without touching the central mandapam ( Nadu mandapam) fell on the opposit side of the tank. While he was hurling valari, gaining inspiration, the gold thread around his waist (thanga araingan) had broken and fell on the ground. In memory of this great feat a statue of Periya Marudhu at Vandiyur Mariamman Teppakkulam at Madurai was unveiled by DR. Kalaingar Karunanidhi, the Hon’ble Chief Minister of Tamil Nadu on 31st October 2007. The English Colonel James Welsh said “ Unencumbered with the cares of trappings of government, he ( Velli Murdoo) led a sort of wandering life and occasionally visited his European neighbours at Tanjore, Trichinoploy and Madura by whom he was much esteemed. If anyone wanted game, a message sent to Velli Murdoo was sure to procure it. or if he wished to partake in the sports of the field, Velli Murdoo was a man to conduct him to the spot, and to insure his success as well as to watch over his safety. Did a royal tiger appear, while his guest was surrounded by hardly and powerful pikemen, Velli Murdoo was the first to meet the monster and despatch him. A life such as this, although it may appear idle and insignificant to those accustomed to the safety of a well regulated country, was very far from being without its usefulness, in a district overrun with jungle, and infested by beasts of prey. The minor game. was, however politely decoyed or driven in front of his European friend, who might thus, with less danger kill hogs, elks, deer, pea-fowl etc in abundance. From this “Oriental Nimrod” I had received many marks of attention and kindness when stationed at Madura, in the year 1795 and then one of the youngest subalterns in the place; a pretty certain proof of his disinterestedness.

The leaders of Sivaganga, Ramnad and Madurai, who had entertained a long tradition of independence and struggle against the forces of imperialism, spearheaded the formation of the anti - British alliance system. Marudu Pandyan, often called the Sherogar (Chinna Maruthu) the most conspicuous among them and the political strategist of this movement, initiated and assumed the leadership of this league of the patriots. Dark in complexion, he had a handsome personality and was of affable manners. Born in obscurity, he by sheer dynamism and devotion to his ideals rose to eminence not only as the undisputed leader of Sivaganga but the central figure of the entire alliance system. A man of the masses, he combined in himself organisational ability and political vision.

Sasivarna Peria Oodaya Thevar died in or about the year 1750 and was succeeded by his son Muthuvaduganatha Peria Oodaya Thevar. He, the 2nd Rajah of Sivaganga was shot dead at Kalaiyarkovil in or about the year 1772 in an engagement with the Nabob. He had no male issue, but he left behind him his widow Velu Nachiar and an infant daughter named. Vellachi alias Velu Nachiar both of whom fled to Verupatchi, where they were joined by the two Shervaigars, named Chinna Maruthu and Vellai Maruthu, menial servants of the late Rajah Muthu Vadugoo, who with the aid of Hyder’s forces, drove the Nabob’s troops out of the territory of Sivaganga and usurped the country. The Nabob in consequence of the calamitous war with Hyder Ali, was powerless to oppose or to punish the usurper; A compromise was, however, effected, whereby the widow permitted to govern the Marava country and Chinna Maruthu the younger, was appointed her Minister jointly with Vellai Maruthu the elder brother. Thus the widow Velu Nachiar suceeded her husband in 1780. Velu Nachiar died a few years later: But the exact date of her death is not known: it was about 1790. Her daughter Vellachi alias Velu Nachiar was nominally made her successor by the two Shervaigars who still continued in power and virtually ruled Sivaganga. 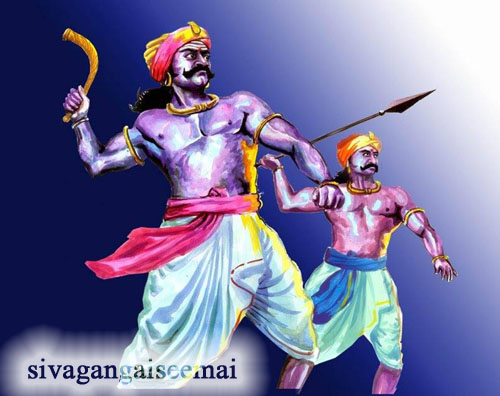 Despite the exalted postion he held in the state, he lived in an open house unattended by any guard, and whosoever desired to visit him had a free ingress and egress. The British administration made no public demand on Sivaganga except the normal rent of one-third of its revenue and took no measure, calculated to cause any embarrassment to his position or to give any mortification to his person.-216 Yet deeply stirred by patriotic fervour, he decided to champion the cause of liberty: He promoted a rebellious spirit, aided the insurgents in other quarters and as the English themselves had asserted, endeavoured to the utmost of his power to subvert the foundations of the British Empire. He patiently analysed the political trends of the times and clearly foresaw whither India was drifting. A great nationalist, he declared rightly that because of European treachery, princely betrayal and popular indifference, the English had reduced a large part of the country to political slavery and if this ominous trend was allowed to be sustained, the freedom of the entire Jambu Dweepa would be completely annihilated. He appealed to all sections of the population to unite immediately and fight till the destruction of alien sway was attained.

The proud and independent people of the southern districts of Tamil Nadu, annoyed at the violation of their rights and customs by an administration that was foreign, arrogant and oppressive and denial of supplies by an arbitrary embargo, appeared determined to jump into any fray aimed at the overthrow of the British power. What the indomitable Marudu proceeded to do was to send numerous emissaries on missions to the headmen of the villages and the poligars of the districts with a message of rebellion. This daring venture undertaken in the face of serious odds and hostile military presence, received a welcome response. Melappan, Singam Chetty and Muthu Karuppa Tevar, the popular leaders of Ramnad, and Gnanamuthu, an influential chief of Thanjavur accepted the leadership of the Sherogar. The inhabitants of Madurai particularly the warlike Kallans transformed themselves into active rebels. In the western region of Tirunelveli Mappila Vannian, described as a popular and daring leader and the son of the poligar of Sivagiri allied themselves with Marudu.

Thus a league of the rebels with Marudu Pandyan as the central figure came into existence. In the eastern region of Tirunelveli, Vira Pandya Kattabomman of Panjalamkurichi took an active interest in the rebel cause more than any other leader and proceeded to organise a league of the poligars.